Swami Haridhos Giri (Guruji) was born in the sacred month of Margali under the auspicious star of Utharattathi. He was born in the sacred land of Arunsala Sheishtram. Bhagavan Rawana Maharishi says that for one who wants to go into sainthood, one has to go through several stages. But one who is born in this sacred Sheistram is a born saint. He needs no other qualifications to enter sainthood. He was named Hari, true to his spreading the Hari ­Namasankirthan cult.

His father, Sri Nott Annaji Rao, was an ardent Bhagavatha and a devotee of Swami Gnanananda Giri. His mother was very pious soul. They belonged to a royal heritage but the princely life with wealth and pleasure had no charm for Guruji in his younger days. He too, like so may great saints, lived an ordinary life of a human being in this mundane world but his urge was taking him away from all these pleasures and pain-ridden life. Even while he was youth he was attracted to Namasankirthanam, the inspiration emanating from his father. Every Bhajan held in any part of the town he happened to live in, found him with eager eyes and throbbing enthusiasm. He gradually experienced in his own self a desire overflowing in his heart to take up this as his walk of life. Thus, the seed for a change in him was sown early in his teens.

In 1954, One day when Guruji was sitting on top of a hill enjoying the nature around him, Guruji saw a small fire about 200 yards away, he asked some of his workers at the tea plantation, where Guruji was working at that time to check it out. The workers went down the hill to check and told Guruji that they could not see any fire around that area. For one week Guruji saw that fire. Then one night Guruji heard a knocking at his door, as Guruji opened the door, Guruji again saw the fire there and suddenly it disappeared and His Master appeared before him. The Master told Guruji that his place is not here and that Guruji is for the world.

The next day Guruji told his boss about the fire and the appearance of His Master. His boss said that it is only an illusion and gave him 15 days leave. Guruji went back to Madras see his father Sri Nott Annaji Rao, who took him to see a saint in a temple outside the city. When Guruji saw him again, Guruji burst out crying. He was the Master that appeared from the fire. The Master told Guruji’s father that Guruji is the reincarnation of love and affec­tion and he wanted to adopt him as his son. Guruji was then sent to a cave in the Himalayas to do penance. For three years and half years he mediated without water and food. Then the vision of His Master appeared before him asking Guruji to come back to his Master. In six months, Guruji walked from the Himalayas to Madras.

Guruji entire personality became aware at once that his innate urge could thus be fulfilled at the lotus feet of his Master, the light of Thapovanam, Sri Gnanananda Giri Swamigal. Guruji became the favourite Chela of Swami Gnanananda Giri the moment Guruji touched Thapovanam. Spontaneous was the surrender too. The dawn of a Guru-Shisya­Bhave life thus started. 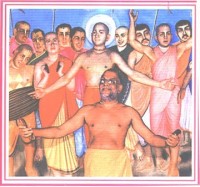 After many trials and tests on this selected Chela, Swami Gnanananda Giri appointed Swami Haridhos Giri (Guruji) and told him to spread and sing in the praise of the Lord ­known as Nama Sankirthanam, as the only pathway to salvation. Swami Gnanananda Giri gave Guruji His Paduka, blessed him with the hidden treasures of our great scriptures and commanded him to undertake a life of renunciation and the mission of spreading the great cult of Namasankirthanam with a musical discourses on saints and sages who had tread this soil in a similar manner.

Guruji together with Namaji formed the Gnanananda Namasankirthana Mandali, Madras in 1959. At the beginning they had only six members, Swami Gnanananda inaugurated the function. Guruji preaches the truth, Guruji preaches happiness, Guruji preaches spiritualism through mediation, penance, yoga, praying and singing. “But to attain the happiness, the wish you desire, you must have a staunch belief in me, and what you are doing. Without belief, nothing will work” said Guruji.

Guruji then toured the world over to spread the Gospel of Swami Gnanananda Giri. Guruji wanted the cult of Namasankirthanam as a world movement, and it needs its own visual means of recognition and also when fraternity meets to bring about a sense of friendship, mutual trust and special greetings to be exchanged.

The Namasankirthanam movement piloted by Swami Haridhos Giri adopted the sign of two fingers “V”. The two fingers represent symbolically “Radhe Krishna” .Guruji also emphasized the need for a permanent establishment to propagate Namasankirthanam. It was the command of His Master, Guruji chose Dakshina Halasyam (Thennagur Village) as the abode for spreading the knowledge of Sanathana Dharma through the medium of N amasankirthanam.

To say a few words of our experiences with Guruji is only to say superficially what we know about him. His mind and thought, day and night is his Lord. A shining example of his devotion to the Lord is perceivable when we sit before our Guruji to hear his Bhajans. It is stupendous; it flows from the heart of the Lord to the mind of the people.

One who has heard about Guruji would expect to see Him in beards and with matted locks; his body smeared with sandal paste and Thulasi Mala around his neck, and clothed in Ochre – coloured robes. But no, as he is fond of saying, he is just an ordinary devotee irrevocably yoked to his Master and dedicated to service of his fellowmen. His endeavor is to see that humanity raises its level for the betterment of mankind. When atheism is rearing its head, Guruji is spreading the belief is God, a lofty spiritual knowledge combines with a child’s heart in his communion with those who seek him and those he seeks out. Often he quotes that his mission is to see that every soul in this earth sings the praise of the “Lord” and the Great Souls with devotion, thus getting out of the egoistic lives.

With undaunted courage and a free heart, he pours forth from various platforms the greatest necessity for today’s men – to cast away their thirst and greed for enjoyment and self-satisfaction in this pain ridden mundane life and to join the select few great men of the past in realizing the goal through the easiest means – the Namasankirthanam. Thousands remain pinned to their seats to hear his mellifluous music accompanied by his brilliant eloquence on spiritual lives of yore. In order to propagate this ideal, under command of his Master, He parts of the world, like in Canada, London, Japan, U.S.A., Zambia, Sri Lanka, Australia, Malaysia and Singapore to serve the masses in variation spiritual and material avenues thus establishing a common ground for them to elevate themselves to higher realms of life.

He attained Jala samadhi at Koteswar, its around 3 km north of Rudraprayag/Himalayas in the year 1994. There is a Hindu temple dedicated to Koteswar Mahadev in Koteswar. Namananda Giri , Principal Disciple of Haridhos Giri built Bhajan Platform in memory of Swami Haridhos Giri and dedicated to him.

With a great inspiration springing fourth by the constant communication with his Master, he has embarked on the great path of spiritual renaissance envisaged by his Guru. May all his devotees and yearning souls pray and get Guruji’s blessing.